Pasar al contenido principal
-A A +A

Two former students at the University of Illinois at Urbana-Champaign and a professor at another college filed a lawsuit Tuesday against a former UIUC professor, claiming he assaulted, bullied and raped multiple students.

The lawsuit, filed in federal court in Urbana against Gary Gang Xu, seeks damages for distress from emotional, physical and sexual abuse.

The lawsuit claims Xu specifically targeted female Chinese students, who often depended on the university for their visa status.

Xu did not immediately respond to requests from NPR Illinois for his reaction to allegations in the lawsuit. He had denied sexual assault claims in reporting by the UIUC student newspaper in spring of 2018.

Xu was a subject of recent reporting by NPR Illinois and ProPublica detailing gaps in how the University of Illinois’ flagship campus has dealt with professors found to have violated its policies after being accused of sexual misconduct.

Xu, who was a tenured professor in the Department of East Asian Languages and Cultures, resigned last year, two years after a university investigation found that he violated a no-contact directive involving a student and had an inappropriate relationship with that student.

Dive Deeper Into Our Reporting

Our newsletter is written by a ProPublica Illinois reporter every week

After the finding of misconduct, he was on paid leave, during which he took outside teaching appointments, including in Stockholm. As part of his resignation agreement, he received a $10,000 separation payment. The resignation agreement also included a confidentiality clause stating Xu “shall not disclose the existence or terms” of the agreement to “anyone else” including “members of the mass media.”

The lawsuit claims the university did not adequately respond to what it knew about Xu’s conduct. It asserts that UIUC was well aware of allegations against Xu years before it took action. Ann Olivarius, an attorney for the plaintiffs, said the university “cast a blind eye” on Xu’s conduct.

“I’ve spoken to a number of faculty, and they certainly were well aware of the misconduct of Gary Xu over a long period,” Olivarius said. “Many of the faculty said to me that they were very upset that nothing had been done.”

A spokesperson for the university said in a statement: “We are aware of the filing and are reviewing it. We cannot comment on any of its contents at this time.”

The statement also read in part: “The University investigates and takes appropriate action whenever conduct is reported that may jeopardize or impact the safety or security of our students or others. The current administration is reviewing and revising disciplinary processes to allow us to take quicker and more forceful action when employment misconduct is proven.”

The lawsuit focuses on Xu’s relationship with an undergraduate student, Xingjian Sun, who is a named plaintiff. She was a 19-year-old freshman when they met in the spring of 2013. Xu was then 45 and the head of the Department of East Asian Languages and Cultures. He agreed to be Sun’s instructor for an independent study course, and the complaint said their relationship became intimate later that year, first involving kissing in his office.

The complaint details a two-year, tumultuous relationship, in which Xu allegedly berated Sun and isolated her from her friends, instructing her to keep their relationship a secret. He raped her, beat her and threatened her family, according to the lawsuit.

The complaint contends that Xu forced Sun to have an abortion when she became pregnant with his child. Because of this and what she considered ongoing abuse, according to the complaint, Sun became depressed and twice attempted suicide. According to the complaint, Xu beat her on the way to the hospital while she was unconscious from drugs from one suicide attempt. The suit also alleges a brutal beating during a trip to China that required a hospital stay.

Xu intimidated Sun into withdrawing three complaints against him she made to the university: “As is typical of a victim of domestic violence, she dropped these reports shortly after making them to protect her safety — Xu beat her and threatened to hurt and her family if she did not,” the complaint reads. 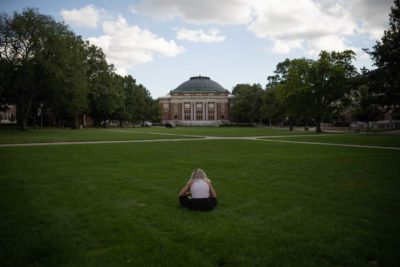 Have You Experienced Sexual Misconduct at an Illinois University or College? We Want to Hear From You.

We’d like to hear about your experience with misconduct on campus, or if you were subjected to it but did not or could not file a report. We need help understanding flaws in the systems intended to hold perpetrators accountable.

Their relationship came to an end in 2015, according to the complaint, after Sun filed a petition for a protective order in August in the 6th Judicial Circuit Court of Illinois. This followed what she claimed was another violent episode. Police were called but did not make an arrest. In October 2015, she dropped her petition for a protective order against Xu, according to the lawsuit.

The second plaintiff is another former student who said Xu took advantage of her work planning an art exhibit in China. The student claims she did other work that went unpaid and uncredited, and that Xu was also disparaging and “overtly sexualiz[ed] her,” attempting to kiss her. The other student, Xing Zhao, said she was used for unpaid labor and that “Xu further used the threat of physical force and actual physical confinement to require her to do his bidding.”

The complaint alleges that Zhao’s experience was not unique and quotes other students, including Grace Chang, a “U.S.-born Chinese woman,” who took classes in the Department of East Asian Languages and Cultures. The complaint claims she witnessed “professors’ exploitation of students labor” at UIUC.

“The international students at UIUC, particularly the women, are incredibly vulnerable,” Chang said, according to the lawsuit. “This is particularly acute for the students who rely on financial aid.”

The third plaintiff is Ao Wang, a professor at Wesleyan University in Connecticut, who “knew of Xu by his poor reputation through academic cirlces,” according to the complaint, and who was friends with a woman Xu had allegedly attempted to rape. Wang had publicized some of these claims on social media and was then sued by Xu in a court in China, a case that is ongoing, according to the complaint. Wang says Xu harassed him and people he knew and made threats, including that he would “kill Wang.”

All three plaintiffs are seeking damages. Sun said that she incurred thousands of dollars in medical bills and that her reputation has been irreparably harmed. She needs ongoing mental health care as she suffers from post-traumatic stress disorder, according to the lawsuit.

Claims against Xu were first made public through Chinese media in March 2018 and were then reported by The Daily Illini, UIUC’s student newspaper. The university declined to provide records about its investigation of Xu to The Daily Illini and Illinois Public Media under the Freedom of Information Act.

The university recently provided its heavily redacted investigative report and Xu’s response to NPR Illinois. It concluded that Xu had an intimate relationship with Sun and that he violated the student code. In Xu’s response, he called the report “full of factual mistakes, logical inconsistencies and fallacies.”

The lawsuit outlined several ways in which the plaintiffs say the university did not take the complaints against Xu seriously enough.

The complaint claims that Sun shared photos of her injuries on the university’s official page on Weibo, a Chinese social media site, after she says Xu beat her while in China. The university also knew that Xu had violated a no-contact directive, but he faced no immediate consequences, the lawsuit says.

“Xu abused this power; the University let him,” the suit reads.

Unlike many other universities, UIUC allows faculty-student relationships, though it stipulates that an individual can’t participate in educational or institutional decisions for a person with whom he or she has had a sexual relationship.

A university task force is reexamining the policy after public scrutiny last fall over the university’s handling of misconduct claims against professors.